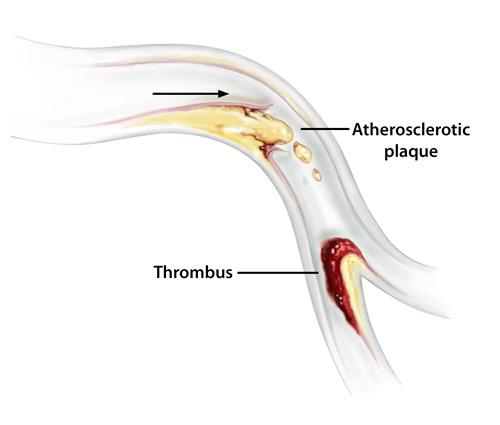 Thrombi (clots) are masses that form within the circulatory system on the inside of arteries, the heart, and prosthetic (artificial) surfaces such as catheters and stents. They are composed of elements of the clotting system, white blood cells (fight infection), and red blood cells. Thrombus formation is a process involving many factors that interact with each other. Although the formation of thrombi may occur as part of a natural "healing" process, inside the arterial system their course is unpredictable and they can cause serious problems.

Indeed, acute arterial thromboembolism is a serious medical problem. It is characterized by sudden occlusion of an artery supplying blood to tissues of the body, resulting in loss of function or tissue death if it is not treated immediately or does not resolve spontaneously. Although acute thromboembolism can affect the upper extremities, the vessels supplying the head and brain, and even arteries leading to internal organs, it occurs more commonly in the lower extremities (legs and feet).

Arterial thromboembolism is usually caused by one of the following:

Arterial thromboembolism is a significant cause of death and disability in the United States. It is a serious problem partly because it is usually the result of a dangerous underlying disease, and also because it often occurs suddenly and without warning. Acute arterial thromboembolism usually occurs at locations where the inner wall of a blood vessel has been damaged or where there is disturbance or change in the pattern of blood flow.

From an anatomical standpoint, acute occlusions typically occur at branch points in an artery. A small area of plaque forms on the inner wall of an artery at the point where the artery splits or branches into two tributaries. This occurs at this location because of:

Although there are other causes, most patients have underlying atherosclerosis, one of the most important contributing factors to arterial thromboembolism. The major risk factors for atherosclerosis include those listed below. Although each of these factors is important alone, they can also be additive if they occur together:

Diseases of the peripheral arteries, such as acute thromboembolism, increase in frequency with age.

Clinical manifestations of arterial occlusion depend on the vessel involved, the extent of obstruction, how rapidly occlusion progresses, and whether collateral flow is adequate. However, for patients with an acute arterial thromboembolism, the history usually includes:

In the past, direct surgical intervention was the only feasible alternative. More recently non-invasive techniques have been developed. When the issue of treatment is being considered, it is important to ask as many questions as possible before the patient and doctor together decide on the optimal treatment. If a patient does not feel comfortable with his or her understanding of the treatment options, it is wise to get a second or third opinion. So what are the options?

Many newer treatments for vascular disease, such as an arterial occlusion, avoid open surgery. These treatments may be performed by interventional radiologists, vascular surgeons, or cardiologists.

Questions for the Doctor

Here are some questions patients should ask the doctor. In some cases, the answers are dependent on the treatment: