Peripheral vascular disease (PVD) is a common circulation problem in which the arteries that carry blood to the legs or arms become narrowed or clogged. This interferes with the normal flow of blood, sometimes causing pain but often causing no symptoms at all. The most common cause of PVD is atherosclerosis (often incorrectly called hardening of the arteries). Atherosclerosis is a gradual process in which cholesterol and scar tissue build up, forming a substance called "plaque" that clogs the blood vessels. In some cases, PVD may be caused by blood clots that lodge in the arteries and restrict blood flow. PVD is sometimes called peripheral arterial disease, or PAD.

PVD is a subtle process in most cases. If there are symptoms, they usually begin as just a small cramp here or there in the calf of the leg. It might be thought of as an injury, a strain, or "arthritis". The legs and feet are particularly prone to the development of arteriosclerosis and cause a number of symptoms including:

PVD can worsen and begin to cause foot numbness at rest, discoloration of the feet, coldness and even early infection and gangrene to occur, which may require surgical treatment. If any of these symptoms develop it is urgent that a physician is seen at once. If these conditions worsen to the point where work or recreation become seriously impeded, it is time to consider surgery.

A vascular surgeon will perform a series of vascular examinations to determine the degree to which the leg arteries are clogged and what part of the arterial system is involved. Many of these tests are painless, safe, and extremely accurate. From time to time, if he or she is considering performing surgery, the surgeon may recommend an arteriogram. This involves introducing a catheter into the leg artery, often in the groin region, and injecting x-ray/visible dye into the circulation. This will accurately locate the disease and its extent and help the surgeon to recommend appropriate treatment. There are always risks and some discomfort with these procedures, and they should be discussed with the surgeon and radiologist before the tests are done.

Depending on where the arteries are blocked and the degree of blockage, many procedures are available. Some are considerably less invasive than others. The major procedures that should be discussed with the surgeon are discussed below. 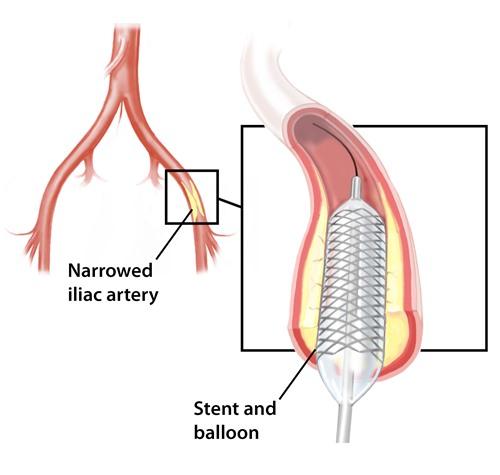 Angioplasty and Stenting: This procedure is sometimes performed by an interventional radiologist or cardiologist and sometimes by a vascular surgeon. It is considered minimally invasive, often requiring nothing more than a puncture wound into the femoral artery. Through a series of catheters, the radiologist or surgeon identifies the narrowed or blocked artery, stretches it open with a balloon and then places a stent in the area to prevent it from collapsing again. The patient may actually go home that day or the next if all goes well. 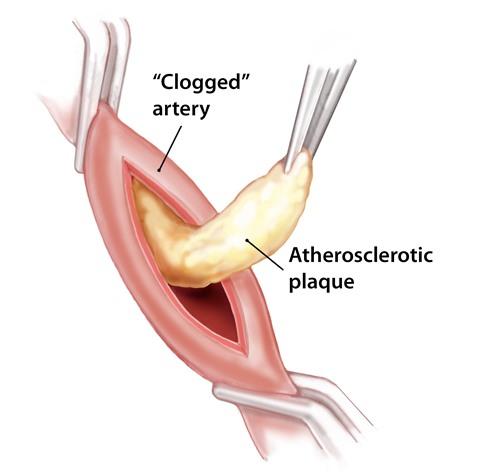 Endarterectomy with or without a patch graft: This is somewhat more invasive than angioplasty and can be used when a very short segment of an artery is blocked or severely clogged. The surgeon identifies the location of the blockage with an arteriogram (injects dye into the artery and observes it under x-ray) and then makes an incision over the area. The clogged artery is opened and the diseased segment removed. The artery is closed or, if this will make it too narrow, a small patch of vein or plastic graft material is inserted as a cap to maintain a large enough opening for the flow of blood. If there are no problems the patient may go home that day or the following day; recovery is rapid. Endarterectomy works well for a clogged carotid artery. 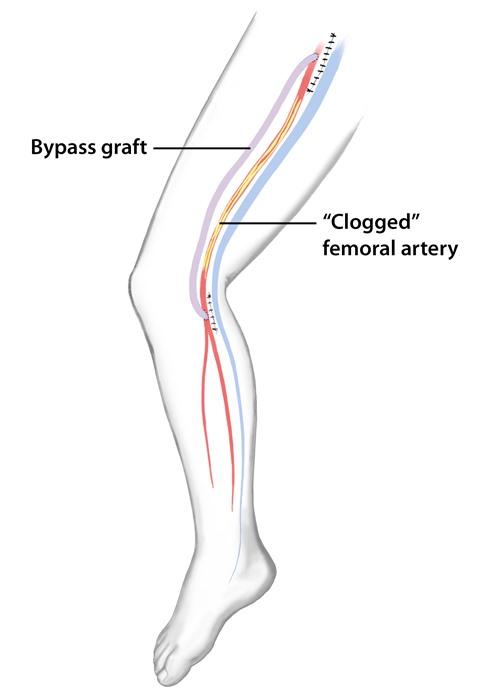 Bypass Grafting: This is one of the most common procedures used for blockages of the arteries in the leg. The bypass is, in effect, a secondary system, sometimes using a vein of the body and sometimes using a plastic graft. The vein or graft is sutured in place proximal "above" and distal "below" to the obstruction. It requires at least two incisions, one above and one below the blocked artery. Sometimes, especially when veins are used, longer incisions are necessary. The length of hospital stay and recovery period is directly proportional to how many and how long the incisions are in the leg. Veins, when able to be used, usually work better and for longer periods than synthetic grafts. 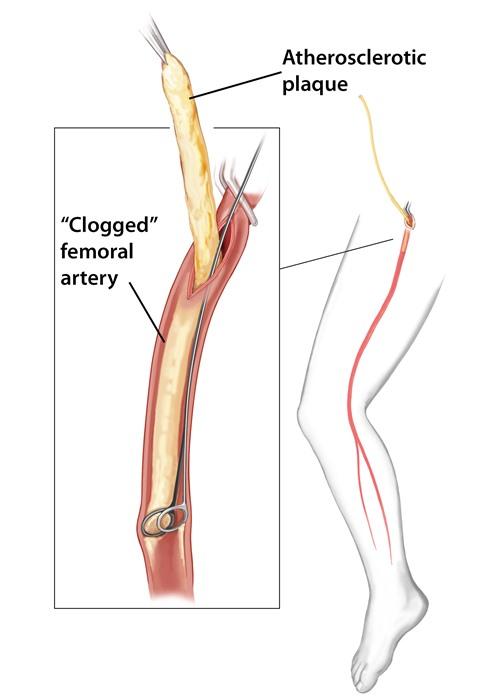 Remote Endarterectomy: Remote Endarterectomy is an effective surgery for advanced stages of Peripheral Vascular Disease (PVD) in the Superficial Femoral (thigh), Proximal Popliteal (just above the knee) and External Iliac Arteries (abdomen). This treatment option allows for the removal of long, solid-segments of plaque from a small single incision in the artery. This surgery is more invasive than PTA/Stenting, but less invasive than Bypass Grafting, and offers good long-term rates of success.

First, the surgeon makes a small incision in the groin area and exposes a portion of the diseased artery. The surgeon then takes a x-ray (arteriogram) to identify the beginning and end of the plaque. A small incision is made in the artery to expose and begin dissection of the plaque. The surgeon then passes a series of devices through the incision, and along the length of the plaque, to dissect and remove the plaque from inside the artery. A follow-up arteriogram is typically performed, and PTA/Stenting may be necessary to manage small flow defects.

Finally, a small patch may be sewn into the incision in the artery, so that the vessel isn’t narrowed when normal blood flow is restored. Barring any unforeseen complications, the patient typically leaves later in the day, or the next morning depending on their doctor’s orders.