Carotid artery disease is a type of cerebrovascular disease that affects the vessels leading to the head and brain. Like the heart, the brain's cells need a constant supply of oxygen-rich blood. This blood supply is delivered to the brain by the two large carotid arteries in the front of the neck and by two smaller vertebral arteries at the back of the neck. The right and left vertebral arteries come together at the base of the brain to form what is called the basilar artery. A stroke most often occurs when an artery supplying brain tissue becomes blocked and the brain does not get enough oxygen. 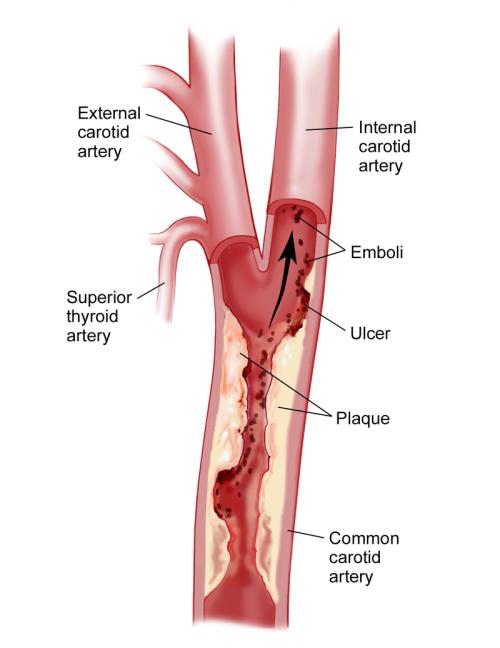 Carotid artery disease increases the risk of stroke in 3 ways:

One of the leading causes of stroke, especially in older patients, is carotid stenosis or the clogging of the arteries in the neck. Each carotid artery divides in the middle of the neck into an internal and external carotid artery.

The internal carotid artery goes straight to the brain and is the brain's major supplier of blood. In the middle of the neck where the carotid artery divides into the external and internal carotid artery, a partial obstruction may gradually develop. This blockage is caused by deposition of cholesterol and components of the clotting system, a disease called atherosclerosis. These blockages form over a variable period of time and often go unnoticed until the severity or degree of blockage reaches about 60%.

Ulcerations may begin to appear within the blockage. This allows small particles to break off and wash from the neck into the arteries inside the brain. These particles of blood and cholesterol debris are called emboli and the condition is called carotid embolism. The particles often lodge in a cerebral artery and can cause temporary loss of blood, called transient ischemic attacks or TIAs, which are brief intervals when normal nerve functions are interrupted.

The symptoms associated with these TIAs can include blurred vision, loss of coordination, slurring of speech, or weakness or numbness in an arm or leg. The symptoms often last only a few seconds but may sometimes last up to 24 hours. If a patient has any symptoms of TIAs, it is important to have emergency medical treatment as soon as possible. These symptoms should not be ignored, as they could be a warning sign that a more serious stroke may occur.

The list below includes some of the major risk factors for stroke caused by carotid artery disease. Although they do not diagnose the presence of carotid artery disease or a stroke, per se, doctors use them to assess a patient's overall risk for stroke. By knowing the risks, the doctor can recommend changes in lifestyle or medications to help reduce the risk, or additional diagnostic tests to determine whether a patient may need surgical intervention. If a patient is aware of any of these risk factors in his or her own history, they should be brought to a doctor's attention.

Patients with one or more of these risk factors should be screened regularly for carotid artery disease.

A primary care physician may listen to the sounds of the carotid artery with a stethoscope as part of a routine physical examination. Even in people without any symptoms suggesting carotid disease, the physician may hear a noise called a "bruit" within the carotid artery. This is a "whooshing" sound that is present in many people who have a partial blockage of the artery. It is usually caused by turbulence in the flow of blood inside the underlying artery. The sound is typically heard each time the heart ejects blood into the circulatory system.

Anyone with a bruit should have a carotid ultrasound test to determine whether there is evidence of obstruction in the artery. Unfortunately, many people with diseased arteries — even those with severe carotid stenosis — do not have bruits. Without any obvious clues, it may be necessary to do ultrasound-screening tests to identify people who are at risk.

Patients over the age of fifty with any of the risk factors noted above should request a carotid ultrasound to screen for carotid stenosis. Depending on the results, the physician may recommend ultrasound screening at regular intervals. If there is evidence of moderate to severe blockage, additional tests may be needed to confirm the severity of the blockage. If a significant stenosis is confirmed, surgery may be recommended. Surgery to remove the blockage is called a carotid endarterectomy.

Patients with any risk factors for carotid disease should tell their doctors about them and ask that their carotid arteries be examined, at least with a stethoscope. Other questions that patients should ask their doctor, particularly if they have any of the risk factors for stroke, include:

Questions to Ask the Surgeon: During the Examination

If a patient has been asked to see a surgeon because of carotid disease, here are some questions to ask the surgeon:

Carotid disease and carotid surgery are both very risky business. These and other questions must be asked and then discussed with your primary care physician or other surgeons.

The surgeon will probably discuss whether the procedure should be done under local anesthesia or general anesthesia and whether any type of monitoring will be used during the operation to protect the brain from cerebral ischemia (lack of oxygen). During a carotid endarterectomy, the surgeon identifies the location of the blockage and makes an incision over the area. The clogged carotid artery is opened and the blockage is meticulously removed.

Sometimes a shunt or tube is placed in the vessel; this allows blood to continue flowing to the brain while the diseased area is worked on. The use of a shunt is important if general anesthesia is used and no other brain monitoring is being performed. This will ensure that there is adequate blood reaching the brain. There are a number of different shunts available, some are less traumatic to the vessel than others due to their size and the way they are held in place in the vessel.

The surgeon should explain how the procedure will be performed and why this particular method was chosen. If the surgeon does not explain all of these things, patients should ask. Patients should always seek a second or third opinion if they have any doubts or concerns.

Questions to Ask the Surgeon: Before Surgery

Here are some questions about the procedure that patients should ask the surgeon:

Some less invasive procedures that avoid an open operation include the use of balloons that stretch open the diseased artery and then hold it open with a stent. This is called angioplasty, and stenting and has been used successfully in other parts of the body. If the surgeon is recommending this procedure, be sure to ask about the extent of his or her experience, the results, and complications.